The FINA wiki is currently being maintained. You can safely read all content, but please don't edit anything here! 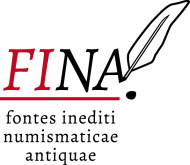 The "Grand document" or "Great document" by François de Callataÿ and Guy Meyer is the basis for the FINA Wiki.

A few words of introduction are required on the history, nature and treatment of this ‘Grand document’, whose title already makes it clear that it is an initial, non-homogeneous document which gathers together many scattered elements.

This is a working document which brings together evidence primarily about numismatic correspondence which was exchanged before 1800. I started the work at the beginning of 2011, fascinated by the rich evidence mentioned by Federica Missere Fontana in her book Testimoni parlanti. Le monete antiche a Roma tra Cinquencento e seicento (Rome, 2009). When reading this survey, which cites hundreds of letters and provides a good critical discussion of them, I had the idea of gathering all such antiquarian correspondence.

This ‘Grand document’ had already reached ca. 500,000 characters (c. 100 pages) when the conference Translatio Nummorum. Römische Kaiser in der Renaissance was held in Berlin in November 2011 (see the publication: Mainz-Rupholding, 2013). I decided to take advantage of the presence of many specialists in the history of ancient numismatics on one hand, and to reply positively to an invitation from the General Secretariat of the Academic Union International to promote new projects, on the other, and so I took there and then the initiative of launching the project Fontes Inediti Numismaticae Antiquae (FINA).

Working in an unsystematic way, I did not succeed in making many additions to this ‘Grand document’ for a long time. From 2013 onwards, Guy Meyer started to send me his many discoveries in various repositories (his name is each time duly quoted). So, encouraged by this external support, I devoted more time to include new evidence and, by June 2016, the ‘Grand Document’ had reached the size of more than 3,500,000 characters.

Scope and lack of homogeneity[edit]

Originally designed as a file which was a compilation of correspondence up until 1800 onwards, the ‘Grand document’ also includes account of other sources, such as unpublished manuscripts, collection inventories and annotated printed books. These additional types of documents have been integrated as much as possible when I have encountered them in the literature. But they have not been systematically searched for, as it is the case for letters. Hence they are proportionally poorly represented and are more in need for an augmentation.

For the correspondence, the ‘Grand document’ contains everything that it seems desirable to include, namely a) published letters (e.g. those of Gisbert Cuper or Apostolo Zeno), b) letters cited in the secondary literature but also - and increasingly - c) unpublished letters which have been digitized and are now available on the internet at various websites (for which Gallica, created by the Bibliothèque nationale de France, still remains a model).

It is very clear that these three types of information have their own peculiarities and difficulties. a) Publications of letters are often old and rarely meet modern requirements. They have often been mutilated by the publisher and transcribed according to standards which vary from one publisher to another. b) Quotations in recent scientific literature are well chosen but fragmentary. c) My transcripts from digitized documents are certainly in need of improvement, especially when writing is difficult to read or when the scans do not include parts of the document (generally the beginning or the end of a line).

Apart from these practical problems, two questions arise: first, should we transcribe the entire letter or only the numismatic passages? Second, is it necessary to preserve the original spelling or is it better to adapt it to modern practice? I have arbitrarily opted for transcribing only the numismatic passages and adapting them to current spelling. These two choices are open to criticism and will prompt reactions by both philologists and publishers. Yet I have chosen to do so in accordance with the declared purpose and intended audience in mind: namely all those who are likely to use this material to study what was called in the 18th c. the ‘République des médailles’. As a result, this big file is largely dependent of the available information and very heterogeneous anyway.

The ‘Great document’ is clearly a provisional document. It is also pretty much – let’s deplore or rejoice in it – an unlimited work in progress. The 3,220 recorded letters so far (written by 444 authors to a total of 617 correspondents – June 15th, 2016) probably does not represent even a third of what is potentially available.

On the other hand, the careful editing of this large evidence would require very considerable human and financial resources, currently unavailable to the project. Therefore, so as not to deprive researchers of this rich body of evidence for too long, it seems appropriate to share this ‘Grand document’ in its present state, despite its many imperfections. As a Word file, it allows searches through keywords, either for specific names of people or places, or common names (but you must be careful to search in the different languages and possible spellings).

In sending this ‘Grand document’, I very much hope to receive additions and corrections which I will be happy to integrate, duly quoting the identity of the contributor. As is it a file in constant progress, it is absolutely necessary to send me these corrections and additions in a separate document (if possible already formatted along the adopted practices) and not to insert them in the text of the ‘Grand document’ itself, even as ‘tracked changes’, as that will inevitably result in an inextricable confusion due to the changes made in the meantime.

I hope that, even in its present state (it has not even been read through), this ‘Grand document’ will prove to be helpful. Many thanks in advance for any additions or comments you may provide.